An Evening with the Master of Suspense: Alfred Hitchcock 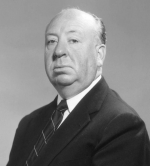 Known as "The Master of Suspense," Sir Alfred Joseph Hitchcock directed over 50 feature films in a career spanning six decades. He became as well known as some of his actors through his cameo roles, interviews, and hosting his television show Alfred Hitchcock Presents. Learn more about this fascinating and charismatic man through Mr. Mandosa's. engaging presentation.

More about the presenter: Mr. Mandosa is a full-time classroom teacher, with a passion for both literature and all things film/cinema. Since 2012, he has given film talks at different venues, such as public libraries, community centers, senior living facilities, local cable programs, and private residences. He also co-hosts Reel Life, a Stoughton-based cable program, which placed second for Arts and Theater at the 17th annual Alliance for Community Media-Northeast Region (ACM-NE) Video Festival in November 2015. For more information on Mr. Mandosa visit frankmandosa.weebly.com

This event is sponsored by The Family Friends of the Billerica Public Library.