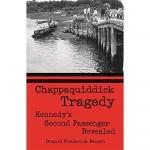 THIS PROGRAM HAS BEEN CANCELLED!

In mid-morning of July 19, 1969 Senator Ted Kennedy reported an accident he had the previous night in which Mary Jo Kopechne had drowned. No one believed the story he wrote in his police report. What was he covering up? What really happened?

Donald Nelson, a retired research physicist, decided to explore the original records of the accident. He pored over thousands of pages of evidence, testimony, books, and written accounts, looking for an explanation of what actually happened that night. His book, Chappaquiddick Tragedy, was the result, pulling back the cloak of the cover-up. Hear about his research, and what he discovered.